Where did all the wombats go? 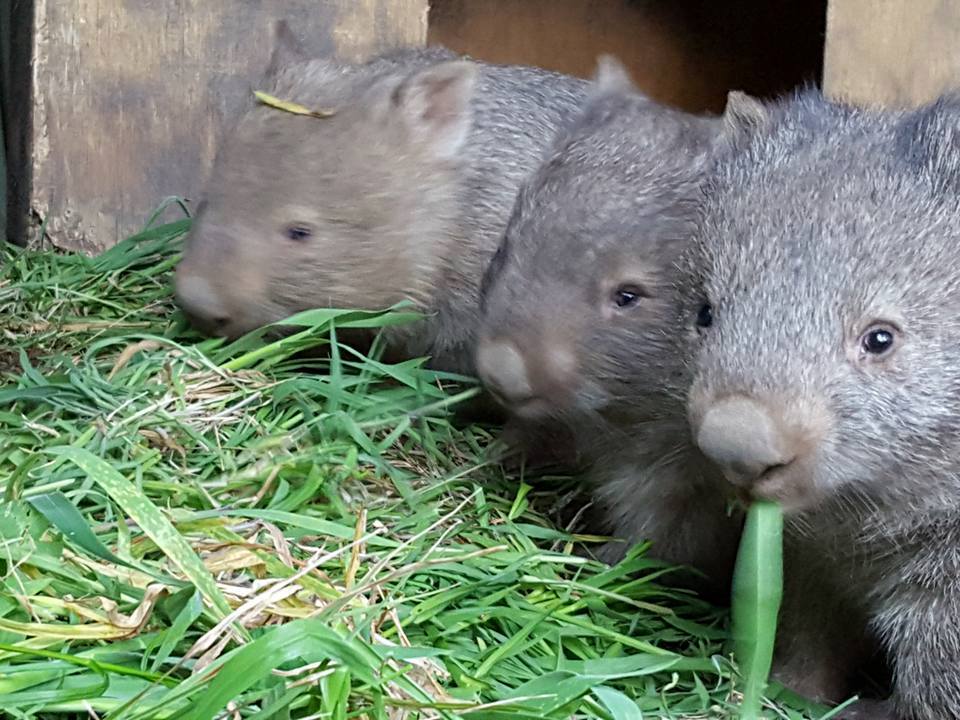 Wombats. The national icon. The little illusive brown guys that munch on grass and come out at night. They remain so separate from our daily lives that we barely think of them, let alone consider that they are at huge risk of becoming endangered.

Two out of the three wombat species are now endangered. If we don’t start to seriously think about what we can do to help, our national icon could become extinct and we could set a terrible example of national identity and preservation to the rest of the world.

The life of a wombat

When wombats are born, they are at their most vulnerable. They are born extremely small and underdeveloped, with very thin skin that doesn’t allow them to keep themselves warm. They are tiny; they weigh only 2 grams and are about the size of a jellybean. Because of these factors, they must stay in their mother’s pouch for about five months so that they can grow and develop before exploring the outside world. They aren’t completely independent until twelve to fifteen months of age.

Wombat burrows can be anywhere from three to thirty metres long and up to three metres deep. Although wombats can only just fit in their burrows, they can turn around in them. The burrow consists of a sleeping chamber (near the end of the burrow situated in half-light) which is lined with leaves and sticks.

Wombats spend about three-quarters of their lifetime in their burrows. They conserve energy by resting, lowering their metabolism, slowing their heartbeat and reducing respiration. In the summer, they will spend their day in the burrow to escape the heat. They will only emerge if the outside temperature is equal to or lower than their burrow temperature to feed alone. Wombats come out of their burrows at night to feed on bark, roots and grasses. They spend anywhere up to eight hours grazing and walk as far three kilometres. However, if you asked, most Australians would say they have never seen a wombat in the wild due to their nocturnal nature. Wombats leave droppings to mark their feeding grounds, which are uniquely cube-shaped. They also mark their scent on trees or sticks to mark their territory.

A wombat is ready to mate at around two to three years of age, and can only give birth once every two years. In the wild, wombats only live for around five years, but in captivity their lifespan can reach 30 years.

Wombats are terrestrial but are really great swimmers. They walk quite awkwardly, however, when they need to they can move extremely quickly. They can run 100 meters in less than 10 seconds – that’s the same time as the world’s faster sprinter, Usain Bolt!

They might look stupid, but wombats are actually quite intelligent. However, they’re pretty stubborn: they will often try to go through an obstacle rather than taking the more logical option. Apparently, they have been known to walk through doors and walls. Wombats are extremely playful enjoying chasing and being chased, head butting things and biting everyone and everything. In saying this, the Northern and Southern hairy-nosed wombats are quite shy. They are solitary animals and will avoid interacting with each other at all costs. The Common Wombat, however, share burrows with each other and interact underground. All species of wombat are inquisitive and get along very well with humans once their trust is earned.

So why are wombats dying out?

Humans are a huge cause of death for this species. Wombats are often victims of road-kill, being run over by cars either intentionally or unintentionally. Often, the wombat who dies is a mother with a joey in her pouch. This is the main cause of orphaned wombats, who are too young to survive by themselves. Unless they are found by rescue teams, their chances of survival are extremely slim.

The farming and ranching communities see their burrows as destructive and they see the wombats as pests. The burrows can sometimes cause field and pasture damage and wombats have been hunted by these farmers to prevent further damage. Farmers will often fill in their burrows, suffocating them, or shoot them.

Humans have also introduced grazing animals into the Common wombats’ natural habitat. They therefore have started dying from starvation, as the land that these animals graze off is the same land that where wombats find their food. They simply cannot compete with the large number of these other animals and therefore do not have the nutrients to survive.

Mange is the most significant natural issue among the Common wombat population. Mange causes an infestation of mites in the skin of the wombat, causing its skin to fall away and scab over. It eventually leads to rotting flesh, organ failure and a very slow and painful death. It is preventable, however, it needs to be caught in its early stages.

All of these causes of death are completely treatable. It is much easier to simply raise awareness and start protecting these animals so that the wombats can begin breeding and replenishing the population. However, female wombats only give birth around once every three years. Their rate of natural reproduction will not outweigh the unsustainable death rate unless we actively strive to protect them. What would it mean if they became extinct?

Nobody is sure what would happen to the ecosystem if wombats were to become extinct. In an article published by the Scientific American, biologist Erin Roger said, “We simply don’t know [the impact] because there is no funding for monitoring or research.” She suggests, however, that they likely play an important role in maintaining the functioning of an ecosystem due to their constant contact with soil. She is calling for an evaluation of their impact on their ecosystem. Perhaps with these statistics, awareness of their importance will be spread and more will be done to preserve these creatures.

Where do you come in?

LiveTribe and its online community are donating $1,500 to The Wisdom Wombat Refuge, its new Noble Causes Initiative. The Wisdom Wombat Refuge is a not-for-profit organisation dedicated to rescuing orphaned joey wombats and injured wombats. Their aim is to rescue, raise, rehabilitate and release these wombats in our care back into the wild to live as healthy free living wombats.

Without organisations such as this, the future of the wombat is bleak. It is so important that we all come together to support and celebrate the lives of these beautiful national creatures.

UPDATE NOVEMBER 2018: Wombats aren’t our only Aussie furry friends that need our help. Read a bit about the declining population of Koalas too.